Criteria asked on multiple sites back in 2012:

1)Must have personal experience with products
2)Must be my own and not 3rd party stories
3)Company’s founding date must be 2009 or newer with first product offering achieving popularity in 2010 or newer.
4)Must not have a parent division that has been founded in 2009 or earlier (company must not be a “spin-off” of older brand)
5)Must be tech centered and not a general startup (Hotel, restaurant, bar, club, entertainment companies are excluded)

It is a company I just started using and it’s a company that has a lot of controversy around it but I found it very awesome and it saved me a lot of money and was very nice to use and did very good.

The pick is: Uber!

Me and my sister went to an anime convention in cincinatti. My mom just haaaad to start a new job when the first day of the con was. Neither me or my sis were up for driving due to sleep issues. I legally can’t drive either. (long story don’t ask, please) and we didn’t want to stay within mom’s 9-5 hours and miss out on the rave and some other cool events later also going too early there wasn’t a lot going on. Mom said cabs were 60-70 some bucks for the trip, was willing to pay but I felt terrible having to have her pay THAT much, so I told her about uber and I knew that some people say it was cheaper then a cab by 1/3rd to ½ price. so she accepted me using her CC# for it. As soon as I got to her place I created the account which was really easy (8 fields to sign up and the site even worked great and fast on opera on a crappy dual core laptop LOL. and I got the app quick and all was good.

The day I used it It got a driver on the first try and she came in exactly 12 minutes. I could even see her face, the make/model of car, the color, and even the real time position of the car coming towards me on the little map. Pretty cool. It was the driver’s first day and we were her first fares and I thought that was cool. LOL. Her car was clean, and in good shape, and she was dressed good and had a clean appearance. She did not dilly-dally around and we got going quick. She was very friendly, and easy to talk to. She drove confidently and followed all traffic laws and drove the speed limit. She did not seem afraid of anything and did not drive erratic. The trip was smooth. She didn’t act funny around us because we were dressed as cats for the convention either. :)

We made it to the destination within the app’s time frame and the ending processes didn’t even need our input till the part where you rate the driver. We gave her a 5 stars.

The app itself has a very nice UI and worked great even on my ghetto rooted galaxy nexus 4.4.4 sprint edition. Had no issues with wakelocks, excessive data/battery drain, and performed well. Wasn’t confusing at all and overall I would give the app a 5 stars as well.

The total came up to be only 27 dollars and some change. Wayyy better than paying 60-70!!!

Overall the whole experience was UBER cool and I love how anyone can be a driver as long as they got a good record, a decent (2005 or newer) car, a good smartphone with a decent data plan/connection, and the price is very affordable and it’s very good thing that taxi cabs has competition because it lowers prices and adds much more convenience features and the fact that you can even see the little car icon coming towards you on the little map and know when they will be there precisely make it painless, and pleasing.

I will definitely use that service in the future when I need it and I highly recommend it over getting a cab any day!

Screenshot gallery: (note: addresses have been edited out to protect addresses of my mom’s place) 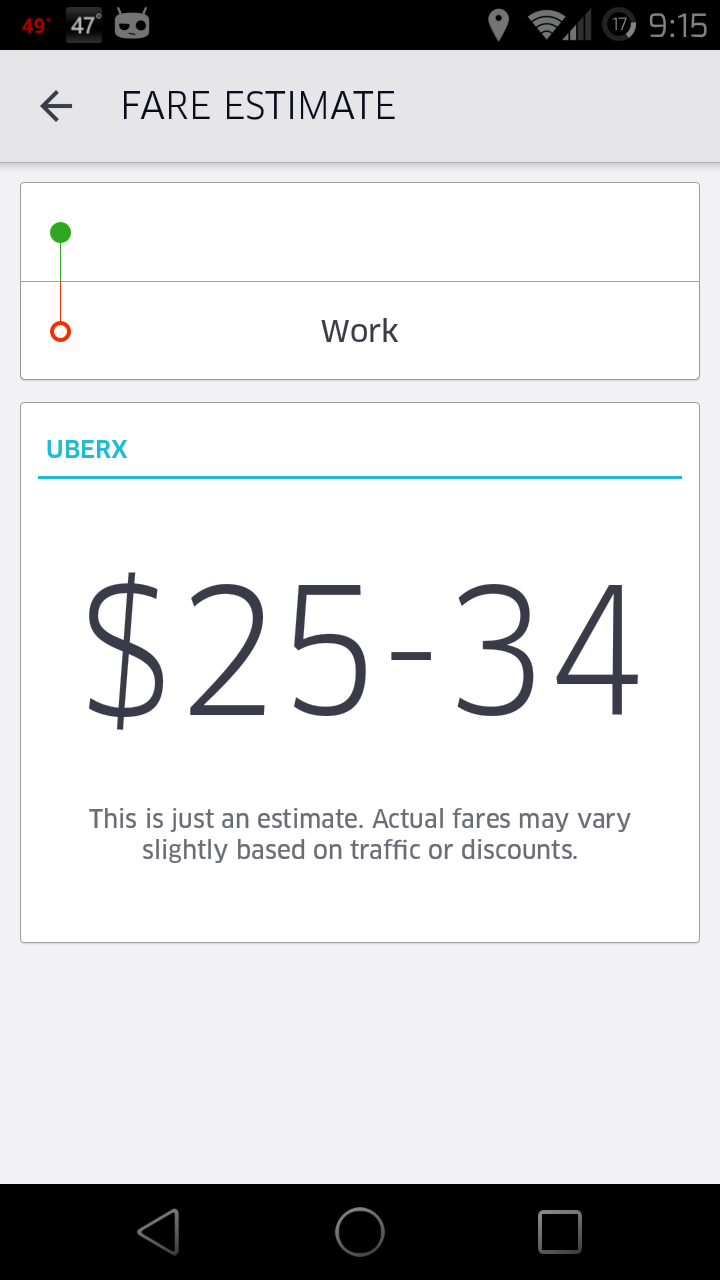 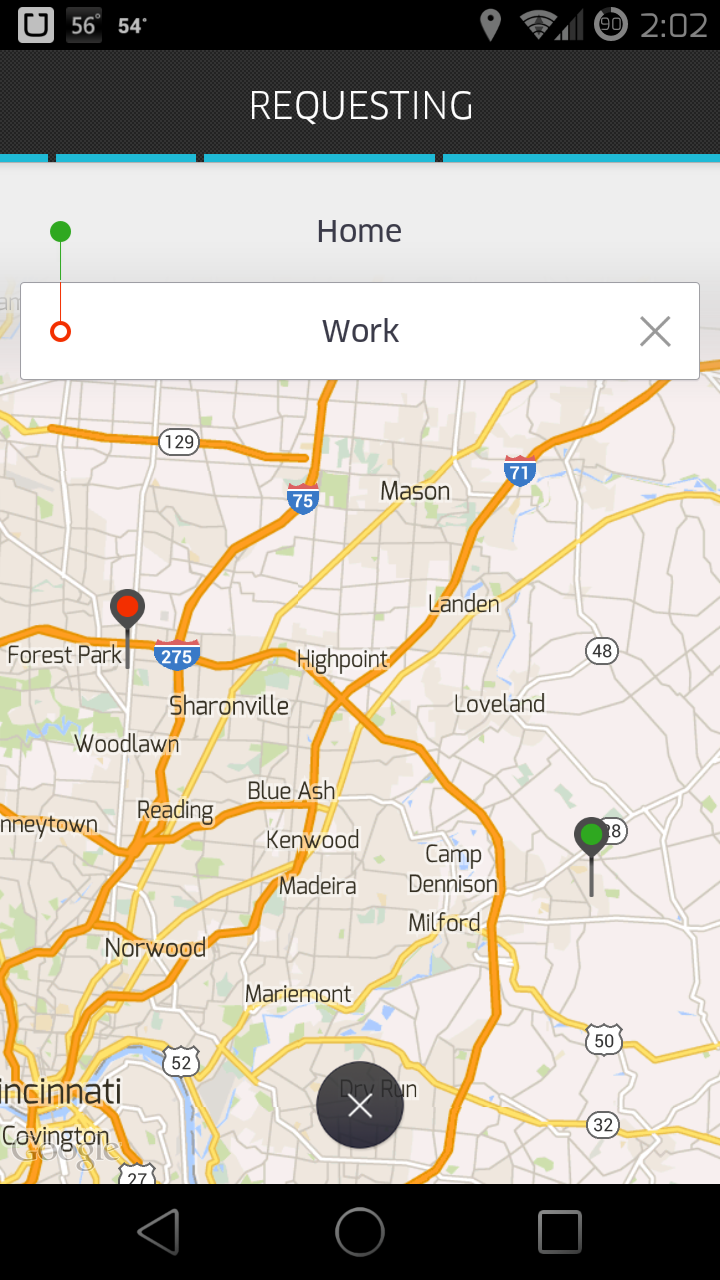 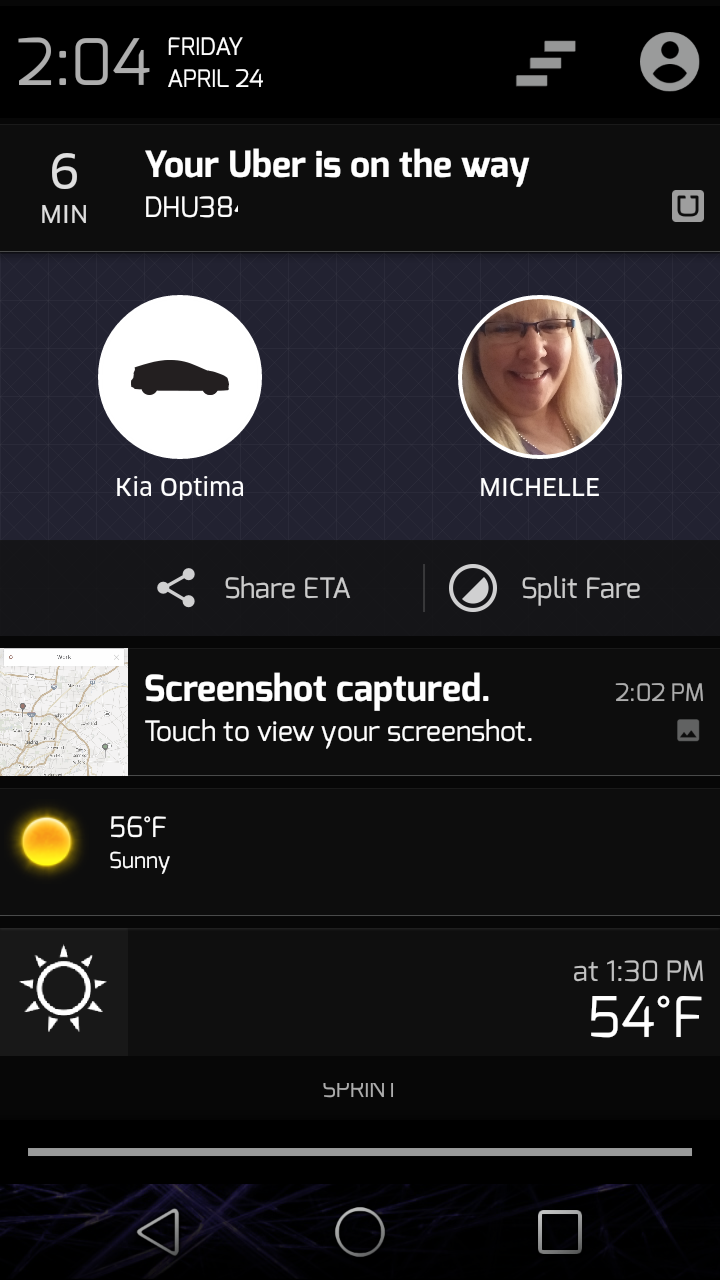 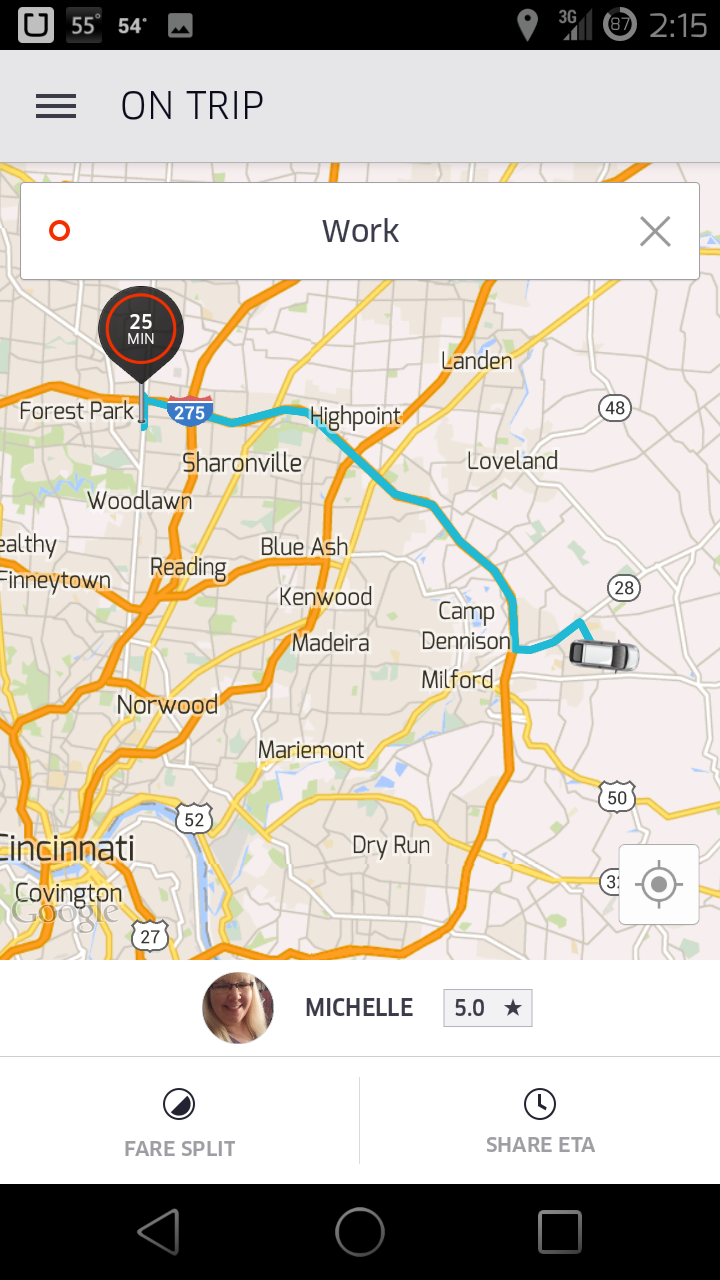 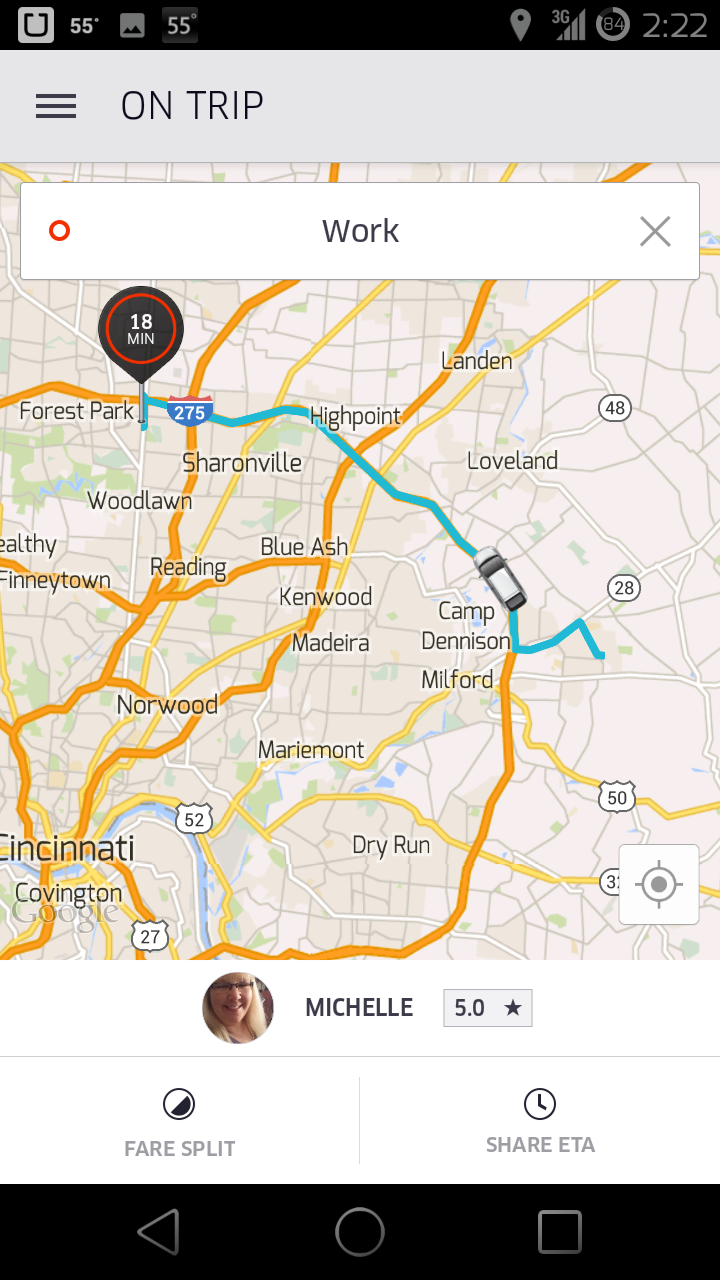 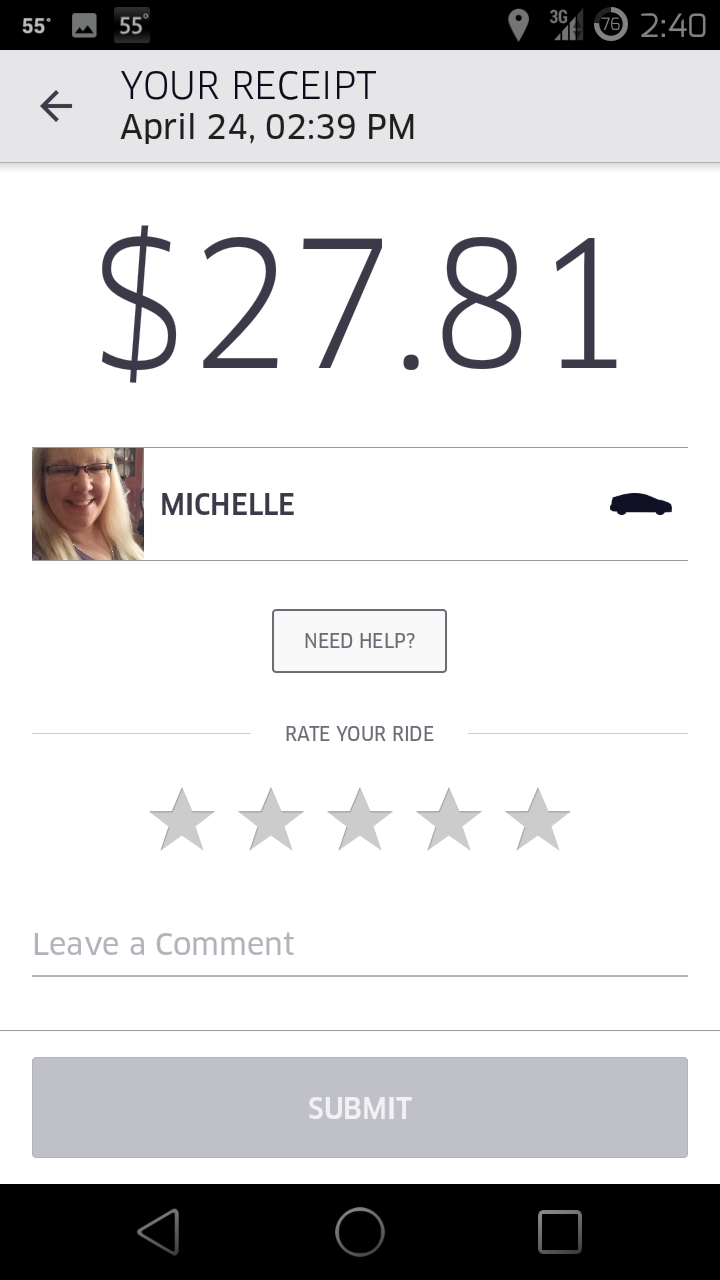