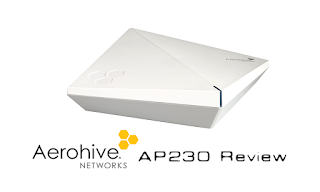 1)Intro
2)Features
3)Setup
4)Wireless configuration
5)Throughput tests (Wireless/Wired)
6)Closing Notes
Intro: The Aerohive AP230 is a enterprise level wireless access point that is somewhat affordable for small to medium businesses, has lots of features and can tolerate a lot of heavy usage that enterprises require.
Review Note: I have been provided three APs  to test the really cool roaming features.
Features: The AP230 features the following:
1) Dual band 2.4Ghz and 5Ghz operation with 3 x 3 MIMO connectivity at up to 1200Mbps
2) Remote mgmt with HiveManager
3) 2 wired Gigabit LAN port (PoE/ ETH)
4) 4 3x3 mimo  x 6dBi  dual band internal antennas with 20dBm output power for great wireless coverage
5) SSIDs with configurable VLANs for each one providing more security then standard guest networks
6) Full VLAN configuration
7) Full and extremely detailed traffic shaping (QoS) and firewall controls
8) Full client connectivity details and monitoring.
9) Fixed and DHCP client address assignments
10) Fully customizable user/group policies
11) Full Intrusion Protection Services
12) SNMP
13) And lots more
Setup:
1) Power brick was a POE injector. Allows for just one cable into the AP.
2) Instant setup was done with the cloud management system and was easy as the Meraki one was. Took a bit longer to configure itself, however.
3) Also These are known for thier VLAN issues, however none of mine had that issue :)
Let's take a look at the really helpful status page that tells us all our status. (Hive MGr Cloud) 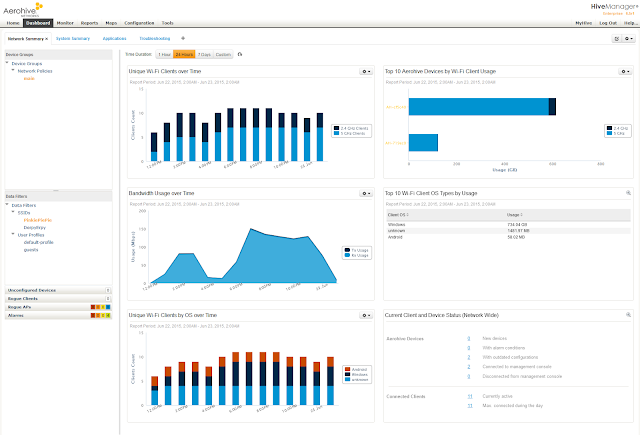 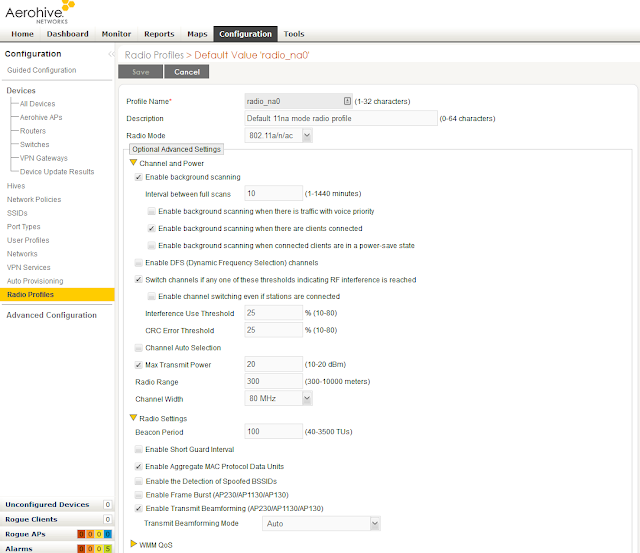 The AP230 supports WPA/WPA2 and supports PSK and Enterprise authentication types that can be different for each SSID. Selecting “Enterprise” allows you to use RADIUS Authentication, which allows you to define a username and password rather then a static key, allowing for more fine control over your wireless network. User based controls allow you to define limits PER USER so that if let’s say, they get fired, you just delete thier user account and not have to change the ENTIRE NETWORK’S encryption key.

Aerohive also has a “PPSK” where you can have different PSK keys for the same SSID without having to deploy a RADIUS server, however the feature did not work on my network no matter what I tried. Support has been engaged and I will update when I hear back.

UPDATE!!!
Aerohive support has resolved the PPSK issue. It was related to having multiple (hive manager) profiles on one SSID and since they have two attribute numbers the SSID profile and hive manager were confused.

Also there seems to be an issue with Realtek based clients where the stability is not very good and the speeds jump around a lot more than Meraki, Aruba, or Xirrus on the same channel, frequency, and channel width.
Roaming:
The roaming works ok, however, the band steering does not work very well. I have several devices I have struggled to get to force to 5ghz and they do not unless I hit the “deauthenticate” button a few times. Very annoying.
I do have sticky client issues with a media device.
I have presented my config to let you know: 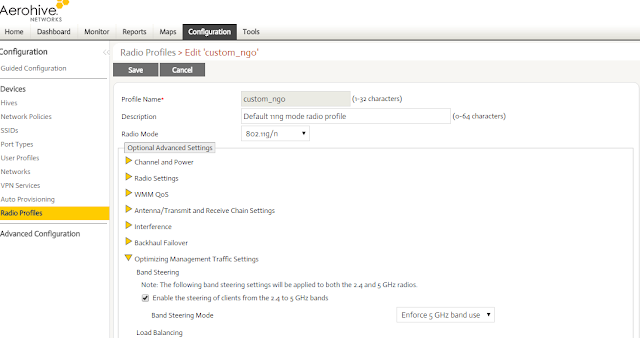 Throughput Tests: (Wireless)
I will be using LAN Speed test for the throughput tests and PRTG to generate the graphs. It also is a comprehensive enterprise level network monitoring software and it can record uptime, transfer rates, errors, etc.
Test environment: (Set 1)
Specs of Building: This is going through about 32 ft through 2 walls, a solid all-wood dresser, and a chimney. The room has plaster walls in some places.
Specs of server :(my machine in the same room as theAP230): Intel i5 3570K/16GB Corsair XMS3 DDR3 1600 RAM/Nvidia Geforce 650Ti/Samsung 840 120GB SSD/Windows Server 2012 Standard/Realtek GBE NIC
Specs of client: (remote machine in other room): AGNXAndrakon/AMD Phenom 9650/4GB Corsair XMS2 DDR2 RAM/Nvidia Geforce 650Ti/Samsung 840 120GB SSD/Windows Server 2012 Standard/Asus AC53 USB WLAN (note: The Amped ACA1 does not work in that machine anymore and is unfit for tests till further notice and is no longer a recommended adapter)
5Ghz 802.11ac mode: Channel 149 -72dBm
LAN speed test: 25 stream 6GB file: 15Mbytes/sec or 120Mbits/sec