Intro/Features
The Logitech G35 is a gaming USB powered headset with 7.1 surround, 3 programmable “G” keys for quick game actions or commands for various pieces of software, Buttons to toggle Dolby Surround on/off, Voice morphing, Flip up microphone that auto-mutes if you flip it up, On ear volume controls to make it easy to adjust the volume, Breathable, light comfortable design, Good sound isolation to keep you immersed in the action, and a long and strong USB cable.
The headset is managed by Logitech Gaming software and has a lot of configuration options for adjusting the headset like The Dolby Surround options, the G keys, macros, Volume controls and sound EQ, Voice morphing, etc. 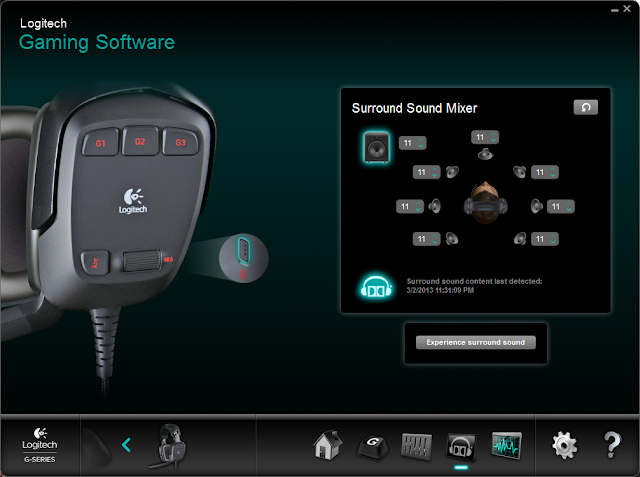 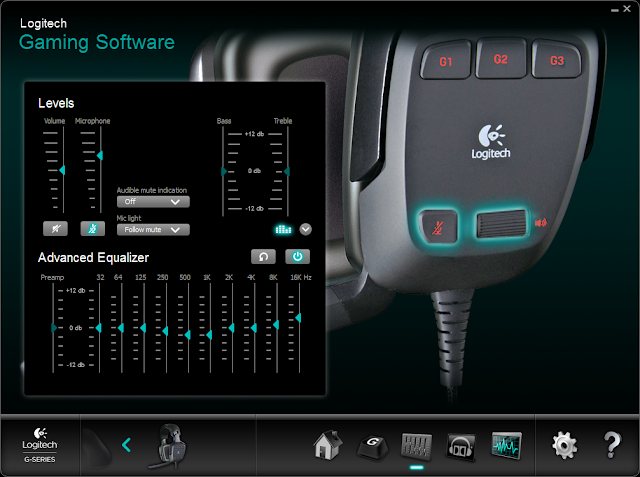 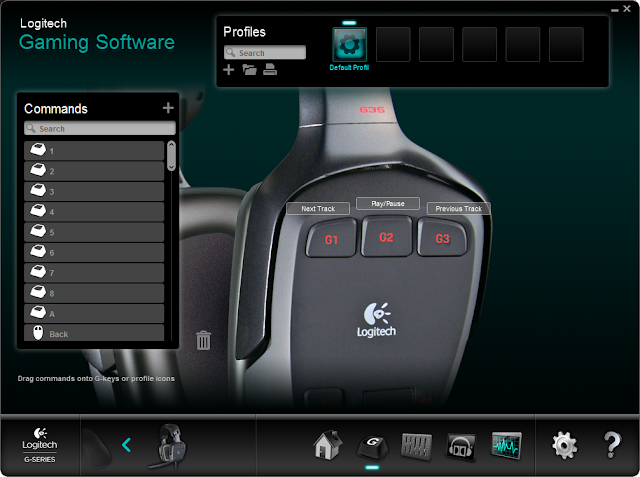 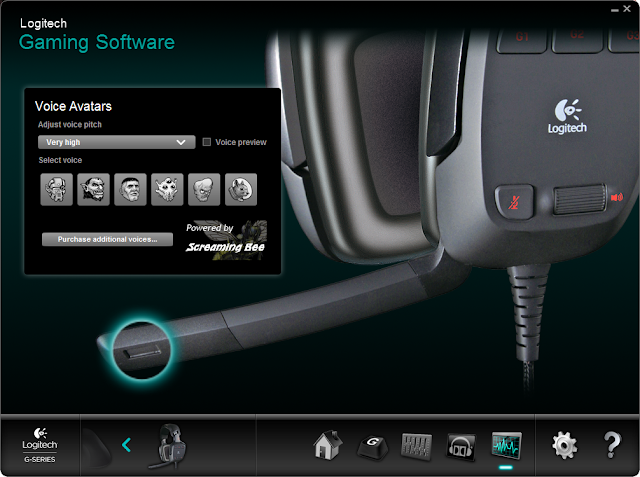 As you can see the software has a lot of options to manage the G35 headset. Each option is self-explanatory and made clear as to what it is and the software also manages other Logitech G series products like my G700 mouse. I love having one piece of software to manage my gear and that is very nice of Logitech to do that. It works smoothly and uses a low amount of resources. I’ve had no crashes or problems with LGS.

Sound (Gaming/Movies)
Very detailed and I can hear a lot more detail then my Asus Vulcan ANC RoG headset. Feels very immersive. Very nice. Not much else to say. I was actually blown away by how awesome the effect is!  Wider sound stage and the surround sound is awesome for this. Skyrim felt more alive. I kind of felt more alert with the surround effect on. Movies felt like I was in the theater and it actually sounds much better than the local theater (They use bad EQ or something).  My husband also uses this and he does not like the surround effect as much as I do and he has it setup to not come from the front as much, but I prefer the full effect, as it reduces fatigue.  I recommend the G35 over the RoG at this price range due to the surround sound experience and the lack of distortion at high volumes for lower frequencies. However the G35 does not have Active Noise Cancellation. That is one drawback to the G35. However the passive noise cancelling still does very good, however not as good as the Vulcan ANC on the RoG headset. My house has a moderate noise environment, however at a LAN it might be more noticeable. Just turn up the volume more and you should be good. The headset seals a little better on my ears then the RoG one does anyways so that’s good.

Voice Quality is much clearer than the previous headset tested: the Logitech H390. His Minecraft buddies are able to understand him better and there is much less static and distortion.
For samples of the mic quality please visit: http://www.youtube.com/user/BadashGames From Feed The Beast 15 (Uploaded march 4th 2013) on are done with the G35 headset and prior to that are done with the H390 headset.
The videos done prior to getting the G35 seem noticeably more distorted and a bit on the scratchy side. However the vocals sound smoother on the G35.

I will make one note about the mic. The noise cancellation is not as extreme as it’s marketed to be. You still have to turn any extra fans in the room off because it will pick up the noise. If you have loud case fans or an A/C unit those will still get picked up in the conversation or the stuff like Skype, TeamSpeak, Ventrilo, etc. You can install some sound buffering material in the room for better sound quality though.

Please note: It does pick up fart noises. So if you are gassy your team mates will know.

Please note: The voice morphing will be tested more thoroughly in the follow up review that I will post at a later date, as well as reports on reliability, etc. However it did work and sounded different.

Sound (Music)
This is where most headsets fail miserably is music. Many people ask whether or not a gaming headset could possibly work for music so you do not have to switch between two types of gear for this. The answer for the G35 is yes for some styles of music and no for others.  The G35 does better for music then the Asus RoG Vulcan ANC does. However, the G35 does not have Active Noise Cancellation.

Here’s a rundown on recommended settings for certain types of music:

Please note: I've selected some songs that are typically a challenge for many types of headsets,headphones, and IEMs.

Hands Up: Surround Off/EQ On (bass and treble bands up +2,+3 for low end and +2,+3 for high end) Very fast bass response and highs are detailed. Benchmark songs: Face 2 Face (Special D Remix)-Future Trance United/ Every Freakin' Day (Club Mix)-Damn-R Recommended: Yes and very much so for this genre

Trance: Surround On/EQ Off Very deep but lacking in detail for mid highs and darker sounding Surround effect is awesome for trance. Benchmark songs: Take Your Hand (Original Mix)-Xtigma/ It's Up To You "(SymSonic)"-Rank 1 Recommended: Yes for some for this genre.

Hardstyle: Surround Off/EQ On (reducing midrange) Very fast bass response, mid-highs have a little distortion at high volumes. On-Headset volume not recommended over 30% due to distortion, Fast highs that aren’t sloppy.  Benchmark songs: Soul Train-Geck-E/ Right By Your Side (Gammer Mix)- N-Force Vs. Darren Styles Recommended: Yes for this genre

House: Surround Off/EQ On (slight midrange cut and gradual treble lift up the spectrum) Very smooth bass response and tight as well. Not boomy. Mids sound a bit quirky at times.  Benchmark songs: Dancing In My Head (Tom Hangs Remix)-Eric Turner vs. Avicii/ I Just Can't Get Enough (Freemasons Mix)-Herd & Fitz (Note: This one sounds better than the first with surround on) Recommended: Yes for this genre

Pop (Bubblegum): Surround Off/EQ On (midrange reduction) with surround on vocals sound like they are in a chamber and weak, with surround off they sound better. Bass response is great and mids are clear with surround off but the same chamber effect is present on mids. Benchmark Songs: Consequence of You-Play/This Is How We Party-S.O.A.P. Recommended: Maybe for this genre

Rock: Surround Off/EQ On Cut treble and midrange slightly. With surround on guitars get drowned out. Screaming voices are distorted a bit with both surround on or off. Benchmark songs: The Howling-Within Temptation/Speak-Lindsay Lohan Recommended: Not for this genre

The weak parts are Rock and Pop. Trance sounds darker than most people would prefer. However I personally love how it sounds for trance, as I prefer a darker soundstage. Again, the above might vary with personal preference, however this is a general guide. Hands-Up and some House did the best on the G35.  I also will note that the G35 is tuned for bass. The bass is very defined on this and it’s more powerful than the RoG headset, as well as more of it being present. I personally love that due to the fact I love EDM Music. EDM fans will love this as well. People that like classical, rock, or acoustic music might not like this headset, however.

Overall
I was impressed at the gaming surround of this headset and the fact the surround experience was great. The headset works very nice for games and movies. The headset is still recommended for music and I personally like it, however that might depend on the listener’s personal preference and style of music they listen to. I recommend it for EDM fans.