October 20, 2011
VMware, Verizon partner on mobile virtualization; May give Android enterprise boost
This is something really awesome from vmware...

In a move that could bolster the bring your own device argument, Verizon and VMware said they will partner on mobile virtualization for Android devices.
Specifically, Verizon will use VMware’s Horizon Mobile technology for business customers. VMware Mobile Horizon will allow IT departments to provision manage and cut off mobile devices over air. In a nutshell, Verizon and VMware will segment devices for both professional and personal uses.
VMware Horizon Mobile will also access the applications in the Android Market. LG will be among the first handset makers to use the VMware-Verizon virtualization bundle. According to GigaOm, VMware, which also announced a pact with Telefonica, ultimately wants to write its virtualization code into Android.

if you have an android phone (others like windows phone 7 and iphone may come soon) you can have a work phone vm and your personal phone vm on the same device, so essentially you have two phones in one device. and you can seamlessly switch between the two.... let's say that you're listening to music and checking facebook or google plus on your personal phone, then "oh I gotta check on that report" or whatever on the work phone.... just slid your finger on the display and swipe to your work phone to log into the work server and see if that TPS report is ready.... and it is, so you check it out and you get done with
that and now it's back to whatever you do in your bathroom breaks... LOL. 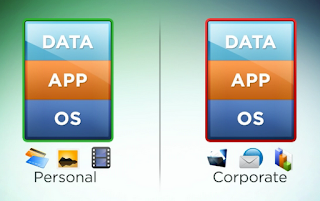 Lots of companies give out company phones to each employee who needs access to their systems....
this on average costs 300-400 dollars for the smartphone itself and another 1440USD/yr for the plans for the phones
let's say you've got 150 employees in your small business...
you will save, on average, with this method, 250,000USD per year by using this tech!
that, in turn can be used to give your employees a raise, purchase better workstations, etc....
also this would make your enterprise greener and more secure as well.
here's a video explaining the process:
so this is very awesome and I hope that most businesses can do the Bring your own cell phone policy and do this because it would save companies tons of money!!!
android bring your own cell phone horizon mobile verizon virtualization vmware