Showing posts from October, 2009
Show all

Society has come to a new low!

October 30, 2009
http://oceanup.com/2009/10/28/girl-threatens-to-kill-a-cat-unless-miley-cyrus-reopens-her-twitter-account When Miley Cyrus broke up with Twitter, hundreds of cities flooded from the gallons of tears coming out of the eyes of tweens everywhere. The world hasn't been the same. Tragic. And now the life of an innocent cat named Fuzzy may also end in tragedy. That's if you believe this website/Twitter account claiming that if Miley doesn't make a triumphant return to Twitter, Fuzzy will be chopped, sauteed and devoured. Yes, some loontardian is threatening to kill their cat over Miley Cyrus. I'll let them explain: The other day I asked myself: 'What can I do to bring Miley back to Twitter?' Fan video? Petitions? Letters? That never works. Heck, Miley even made her own video about never wanting to use Twitter again. Then I looked at my cat, Fuzzy and I realized, maybe Fuzzy can help. Fuzzy can make the ultimate sacrifice for this cause. It was very difficult for
Post a Comment
Read more

October 25, 2009
Grass-written by: RemixedCat this is a poem that sucks ass this is a poem about grass it is green it is long it is tall it is wide this poem sucks cause I can't decide what else to put in here I think you need a beer to deal with some kinda peeps that makes you itch and get the creeps and I hate marshmallow peeps!
Post a Comment
Read more

October 20, 2009
Light can be slowed down so that a beam of sunlight can travel at a leisurely stroll, be brought to a standstill, or even stored for later use in the form of a rainbow. Today, details of an exotic kind of material that can slow light from its top speed of around one million million metres per hour so that it can be trapped as a crescent of colour is published by a team that suggests if could mark a revolution in computing. This remarkable feat could allow "broadband storage" for "broadband computing" capable of much greater power than conventional silicon chips because it can process information in the form of many light beams simultaneously, just as optical fibres can carry lots of conversations simultaneously. And it could also mark an advance in quantum computing, named after the strange quantum properties of matter at the atomic level, that could enhance the power of computers millions of times beyond anything available today. The extraordin
Post a Comment
Read more 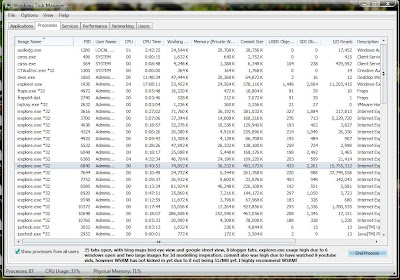 does this have any benifit using it locally to control apps or is this good only for "server" apps. I would love to use this to contain photoshop and its nasty leakage as well as other apps like IE. Can this work locally? I will post some wiki info right here to get everyone the gist of it: "Windows System Resource Manager (WSRM) is a component of Microsoft's Windows Server 2008 operating systems that provides resource management and enables the allocation of resources, including processor and memory resources, among multiple applications based on business priorities. It is also available as a downloadable add-on for Windows Server 2003 Enterprise and Datacenter editions. WSRM enables users to manage CPU and memory utilization on a per process basis. An administrator sets targets for the amount of hardware resources that running applications or users are allowed to consume. It can allocate resources among multiple applications on a server according to defi
Post a Comment
Read more

This is a beautiful example of Bethesda's Radiant AI!

Q and A With RemixedCat