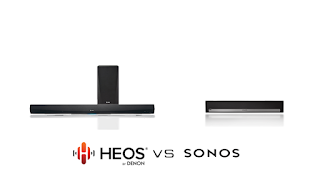 Denon Heos vs SONOS
This is one of the review quickies.
This is a review that compares the DENON HEOS to the SONOS PLAYBAR
First off the specs of each are the following presented in a comparison table, where the differences are presented accordingly.
Setup comparison (hardware/software)
Both soundbars seem to be made well on the hardware end and they both don’t feel cheap
They both had great cables included and plugged in fine to my A/V gear.
Here’s a table outlining my experience with setup and config of both units:
Sound quality:
Both soundbars have pretty good sound quality. I’ve tested with several movies and types of music.
Here’s a rundown of the highs and lows of both units:
Overall Performance:
Both soundbars have done relatively well as a whole, however I’ve presented the high and low points of both:
Closing thoughts:
Both soundbars are “The” ones to have, however for those that seek ultimate compatibility with thier A/V gear should go with the Denon offering, as well as being able to interface with local media servers like Plex, Emby, ServIIO, or other DLNA offerings. Those that have a TV that has no issues with optical, have a simple wifi network, and not use DLNA could benifit from the SONOS, however, SONOS remains vulnerable to being phased out when network admins start to block 802.11G clients or traffic shape them to the point they no longer work, and the lack of HDMI/ARC and other inputs can be a problem for those that have older TVs or ones that drop outdated optical in favor of HDMI or wireless. The fact, also, that SONOS has no dual band wifi will scare people away that have too much 802.11 2.4Ghz congestion, as it RELIIES on it. The HEOS uses dual band which is best in most congested environments. I could not, also get the SONOS to work with many older TVs that lack the HDCP support to support HDMI device output to an optical source like outputting the Roku 1 over HDMI to the SONOS Playbar’s optical. You can’t do that on tons of TVs and it needs to be fixed. I can do that with the HEOS but not the SONOS. SONOS chose simplicity over compatibility and this is where it failed. Also SONOS charges and extra 700 some USD for the subwoofer while DENON includes it. The high points for SONOS are the fact it can be administered via a PC controller app so you don’t need a smartphone to manage it is nice. I wish DENON had that. However DENON has a much more refined app experience.
Overall the ratings for both are as follows:
Denon HEOS: 4.5/5
SONOS Playbar: 3.5/5